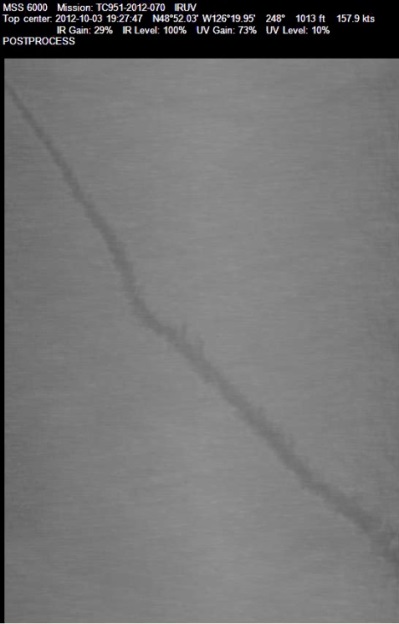 New innovative use of the MSS 6000

Transport Canada has extended the boundaries of the maritime surveillance system MSS 6000 by using it in a new innovative way: Whale spotting!

Whales are an endangered species and the subject of attention from many scientists worldwide. Whale researchers want to identify the presence of whales, learn what draws whales to this part of the ocean during the late fall and winter, and study their patterns and activities. Knowing where whales are is important because it can help manage interactions between an endangered species and the human activities that impact those species. The labor-intensive work of surveying for whales is usually done by human observers on ships or airplanes, and is limited by the conditions at sea.

On October 3rd 2012 the Canadian National Aerial Surveillance Programme (NASP) was on a multi-tasking mission (pollution patrol & whale survey) off the west coast of Vancouver Island. Aboard the aircraft there were two pollution patrol technologists from Environment Canada (Transport Canada) and three Cetacean Researches from the Pacific Biological Station. On 17th April 2013 there was another flight 50 to 90 miles southwest of Cape St. James which is on the Haida Gwaii Islands. Mr Hilchie, Manager MART Pacific for the NASP Program was the MSS 6000 system operator. During those whale monitoring flights and on both occasions he has been able to report recent whale activity and distinct groups of whales seen with both the IR/UV scanner and the SLAR.

For whale surveys one flies a search pattern at a low altitude. The observers are looking for whale spouts.  These can be detected and marked in the SLAR waterfall window for time and position. In the SLAR and IR imagery they show up as anomalies.

When the whale surfaces it brings up deeper cold water and this shows up as breaks in the IR signature. The surface cold water in the IR scan is broken up in 155m lengths with 75 m length when there is no disturbance of the surface temperature – this would be consistent with the diving of the whale.  The IR trace is also patchy due the more erratic movement of the whale.

IR scan of a ship track

This differs significantly from the IR scan of a ship. The cold water plume of a ship is very evident on the IR-scan due to the action of the propellers. It shows a clear straight uninterrupted line. It also follows the AIS positions of the ship.

These observations are documented in a report written by Mr. Ralph Hilchie, Senior Technologist and Manager MART Pacific working for the NASP programme with very long experience in this field.